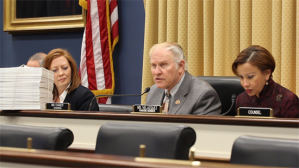 WIPP’s access to capital platform, Breaking the Bank, continues to gain traction in Congress as two more priorities cleared the House Small Business Committee during this morning’s markup. The Commercializing on Small Business Innovation Act provides much needed improvements to the Small Business Innovation Research (SBIR) and Small Business Technology Transfer (STTR) programs. These programs provide funding for small businesses to innovate through research and development partnerships with federal agencies. WIPP’s platform advocates for a public-private partnership to accelerate the commercialization of technologies developed through the SBIR & STTR programs and the bill passed today does just that. The Commercialization Assistance Pilot Program will allow small businesses to receive additional funding to assist entrepreneurs with bringing their products to market after completing the program.

Women’s Business Centers (WBCs) are an invaluable resource for the 10 million women entrepreneurs in the country who annually contribute $1.4 trillion to the nation’s economy. Legislation to reauthorize this program, the Women’s Small Business Ownership Act of 2015, was cleared by the Senate Committee on Small Business last fall and now the House Committee has followed suit. The Developing the Next Generation of Small Businesses Act of 2016 provides much needed updates to the WBC program including expanding annual authorized funding to $21.75 million and increasing the grants available to centers that provide training and counseling to entrepreneurs.

Although impossible to summarize all of the changes in a few paragraphs, which is why we have the link to the bill above, here are the highlights. The bill tackles transparency by rewriting – in plain English – the requirements for small business procurements. Since getting past performance is an obstacle for contractors getting started in federal contracting, the bill establishes a pilot program that enables them to get a past performance rating by submitting a request to the contracting officer and prime contractor. Offices of Small and Disadvantaged Business Utilization (OSDBUs) will now have increased authority to recommend which small business set-aside programs are most appropriate for each contract at their agency. The Act even touches the Department of Defense (DOD) by requiring that Mentor-Protégé plans in DOD’s program be approved by SBA – an update aimed at adding consistency to Mentor-Protégé Programs government-wide – but controversial since the last time we looked the Defense Department does not generally defer to SBA.

The intent of the legislation is to assist federal agencies in meeting their small business contracting goals. The goal for women owned companies of 5% has never been met. A continued push for data transparency surfaces in the bill as well, requiring agencies to do a better job of reporting the contracting dollars awarded to small businesses.

The Committee is expected to hold a markup to consider this legislation during the week of January 11.  The WIPP Government Relations team will continue to provide updates as the bill moves through Congress.

Despite its official passage into law and SBA’s implementation, some contracting officers in federal agencies are waiting for the addition of official language to the Federal Acquisition Regulation (FAR) to use the new sole source authority in the women’s procurement program. We have seen first hand that regardless of SBA’s assurances that the law is ready to use, some agencies are reticent to use the new authority until the FAR has officially adopted the change in law. The Federal Acquisition Regulatory Council has already drafted the rule, which is currently in a review phase. And so we wait. 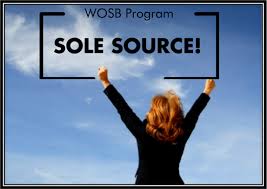 How can women business owners speed the process and become an early pioneer in sole source contracts? Sharing key information with federal agencies is important. Small business offices as well as the contracting community need education on the program.  Since this is the newest small business contracting program on the books, many acquisition officials are still getting used to it.  The sole source piece, although mirroring the HUBZone program, is brand new and worthy of explanation.

Resources from WIPP such as the criteria for a WOSB sole source article, SBA’s final rule on sole source, and any future rulings by federal agencies reinforcing sole source awards for WOSBs, can help Contracting Officers support a sole source justification. ChallengeHER events now being held around the country are an excellent venue for learning about the WOSB program and recent changes.

And, it is important to dispel the myth that sole source justifications can only be used if your company is the only company in the universe that has a particular product or performs a specific service. Take a look at other sole source justifications found at FBO.gov. You will find that reasons such as close proximity to the buyer, employing the most highly skilled staff, and the ability to customize a product have all served as justifications for sole-source awards in other programs.
We are so close but every day that the FAR Council fails to act, some woman owned company stands to lose what could have been a contract award.  WIPP, through its advocacy, will continue to do what it takes to get this final piece in place.

This October we are particularly excited to celebrate National Women’s Small Business Month because of the release of the results of the 2012 Survey of Business Owners (SBO) and the SBA issuing the final rule on Sole Source Authority. It has been a big year for women in business to say the least.

The theme for this year’s National Small Business Month is “10 Million Strong” recognizing the 2012 SBO results of the nearly 10 million women-owned businesses currently in the United States. This is a 27.5% increase from 2007 survey results, showing that women-owned businesses are growing and in turn boosting the economy.

We also have cause to celebrate as the Small Business Administration issued the final rule improving access to federal contracting opportunities for women-owned small businesses with Sole Source Authority. This rule is expected to be effective and available for use by federal agencies on October 14, 2015.

As we celebrate 10 Million Strong this October, WIPP will be highlighting women business owners on our boards, throughout our member base and networks. Please check out our twitter, Facebook and blog throughout the month to hear the stories of these female leaders.