The National Women’s Business Council has released its Annual Report, “10 Million Strong – The Tipping Point for Women’s Entrepreneurship,“ and the number of women looking to be entrepreneurs is at an all time high. Women ‘s entrepreneurship has gone from being a trend to a huge growth factor to the economy of this country. According to the report, women-led businesses are predicted to increase by more than 50% over the next five years – women are launching roughly 1,200 new businesses per day.

Better resources and opportunities have created an opening for women to grow their brands and build larger networks to support their products and businesses, crowdfunding being one of the best resources. Though women are still far behind men in financing their businesses, they are receiving more funds today than ever before.

In 2016 the Council is looking to keep the growth momentum going and will continue to research and support women business owners. Click here to view the full report online. 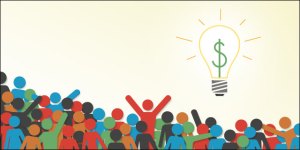 Crowdfunding is not new to businesses.  You have likely seen or participated in campaigns to help companies bring their idea to market or to grow their business.  In return for a small investment, you receive a product, gift or service in exchange.  This is known as rewards-based crowdfunding, which began to become a viable avenue for raising funds for businesses in 2009 with the launch of a number of crowdfunding platforms like Kickstarter and Indiegogo.

With new rules from the SEC, crowdfunding is now getting an upgrade.  Equity crowdfunding allows a business to seek capital from a diverse group of investors through a “funding portal” and provides investors with an equity stake or stock in the business. Crowdfunding transactions are exempt from the complex and expensive securities registration process. These transactions could be a simpler equity financing option for small businesses; however, the total costs that small firms will incur from a crowdfunding offering are still unclear.

The Securities and Exchange Commission (SEC), who oversees the process, issued a long-awaited final rule on equity crowdfunding that will be effective January 29, 2016.  Highlights of the new requirement include:

WIPP has been a strong advocate for finalized crowdfunding rules, having included the priority in the recently issued Access to Capital Platform. The SEC’s rule will allow small businesses to raise capital through investment without triggering federal securities laws and registration requirements.

The Office of Advocacy is an independent office within the Small Business Administration that is a great source for small business statistics, as well as a voice for small business owners that can express their views and issues to policy makers in DC. Today, the Office of Advocacy released an issue brief on “Peer-To-Peer Lending: A Financing Alternative for Small Businesses”.

To explain a little more, Peer-To-Peer Lending or P2P is a funding model where individual investors give small personal loans online to individuals. The Office of Advocacy describes P2P as a hybrid of crowdfunding and marketplace lending.

The issue brief released today details the funding model and gives a side-by-side view of P2P and traditional small business financing options. It also shows how it could affect small businesses in the future, giving them more opportunity for financial growth.

Read the brief to learn more.

For the better part of two decades, WIPP championed the effort to help bring women into the lucrative federal market. As many of you know, we accomplished much of what we set out to do with the addition of sole source authority. Since then, however, WIPP’s team in Washington has focused on a statistic that kept repeating in our brains: women receive only $1 out of every $23 that is being loaned to small businesses. How was that possible?

For months WIPP devoted time to researching the landscape of business finance, capital access, and small business lending. What we found was that there are many policy ideas about how to stimulate lending to women – ultimately growing the economy because we all know the economic impact of women-owned businesses.

But we have a long way to go. In 2013, more than two in three loan applications for women-owned firms were denied. WIPP’s annual membership survey regularly finds that women must make multiple attempts to secure bank loans or lines of credit – with a full 40% never succeeding. All this despite women making up one-third of business owners, generating more than $1 trillion annually in receipts, and growing at 1.5 times the rate of average businesses.

The platform WIPP released today, Breaking the Bank: Women Entrepreneurs & the Need for Capital, will hopefully change that. The solutions span three main themes: changing the capital infrastructure, supporting small lending institutions, and strengthening government investment. The platform has four solutions that will change the capital infrastructure. For example, WIPP wants the government lending programs to consider FICO’s alternative credit scoring system. This system modernizes the way credit is calculated to provide new opportunities for women entrepreneurs trying to obtain loans. WIPP also wants to support small lending institutions by pushing for an end to a “one-size-fits-all” approach to regulation. Removing these burdens on small banks will allow them to return their focus to lending.

Changes to government policies are an important part of the platform. WIPP believes a small business seat at the Securities & Exchange Commission will ensure that smaller women-owned firms have an advocate as the next generation of alternative lending, like CrowdFunding, is eventually put into place. Modernizing the Microloan Program, where women are the majority of loan recipients will also make a difference. Women owned small businesses are growing at 1.5 times the rate of average businesses, but they will never get off the ground if they cannot obtain early stage capital.

WIPP does not have a monopoly on good ideas but we have an important voice in public policy. Over time, we may add to this platform to ensure that all policy solutions improving access to funding for women entrepreneurs can become part of the debate in Washington. We ask you today to look through WIPP’s access to capital platform and share it with one other woman you know. If our successes in Washington in the 15 years WIPP has been an organization are any example, we will need a lot of women behind us to make this platform a reality.

My Tweets
Follow Women in Biz Blog on WordPress.com