The final agreement on Trans-Pacific Partnership (TPP) got a substantial coverage across the news, as it is the largest regional trade accord in history. As covered a few weeks ago, it encompasses USA together with 11 Pacific Rim nations and addresses many complex issues – from reducing tariffs and quotas, to imposing rigorous environmental, labor and intellectual property standards on partners, easing cross-border data flows, establishing an investor-state dispute settlement mechanism, to free trade in services, and imposing competitive neutrality on state-operated businesses.

There is one particularly important area, which deserves a separate attention – focus of TPP on small and medium-sized enterprises (SMEs).

Last week, National Small Business Association hosted a webinar where Andrew Quin, Deputy Assistant U.S. Trade Representative for Southeast Asia and the Pacific, among other described new chapter of the TPP deal focused on SMEs. The chapter aims to tide together all different elements that benefit SMEs and he highlighted 2 major areas:

All of the above claims to suggest that TPP is more beneficial to SMEs than any previous trade agreement. Mr. Quin also reassured that TPP will not have any impact on Minority-Owned Small Businesses set aside programs (including the one WOSB program for women).

Another topic that came out after few weeks is the reauthorization of Export-Import Bank (EXIM). As Mr. Quin stated, it is a separate initiative but important piece to allow a full benefit of TPP. EXIM is providing loans, guarantees, and insurance to U.S. exporters and has made SMEs exports the top category supported last year (source) when $10.7 billion of total $27.5 billion worth of U.S. exports went to U.S. small businesses. 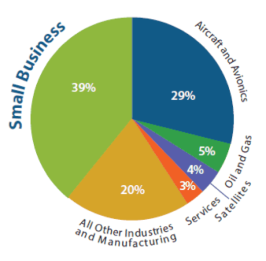 Many SMEs publicly supported EXIM reauthorization, and they all have now a hope that it might be successful after all. A rare procedural move brought EXIM to the House floor and got a surprising support in the 313-118 vote to renew, including from 127 Republicans.

However, now the supporters will have to secure passage in the Senate but they seem to have a chance through its attachment to another vehicle, such as legislation to renew highway funding (source).

Overall, current news seem to suggest that it is a good time to be an exporter and according to the latest annual report Profile of U.S. Importing and Exporting Companies released by Census Bureau, many SMEs have already realized that as they accounted for 98 percent of the number of U.S. exporters in 2013 and $471 billion in known value of goods exports.