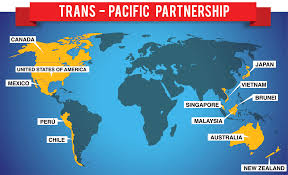 October 5, 2015 will be remembered as a day when the United States and other 11 Pacific Rim nations reached final agreement on the largest regional trade accord in history – the conclusion of the Trans-Pacific Partnership (TPP.) The countries form a group with an annual gross domestic product of nearly $28 trillion that represents roughly 40 percent of global G.D.P. and one-third of world trade, which reflects enormity of the deal.

Together with the U.S. members are Australia, Canada, Japan, Malaysia, Mexico, Peru, Vietnam, Chile, Brunei, Singapore, and New Zealand. Geography would suggest for China to be member as well but though it has expressed interest in talks, it is not among founding countries (causing different speculations and interpretations).

The deal now needs the approval of lawmakers in member countries, including the U.S. Congress where it is expected to be under thorough scrutiny. Public debate is also weighting all pros and cons. Supporters say it will unlock opportunities for exporters but opponents see the partnership as a continuous way of sending manufacturing jobs to low-wage nations.

Similarly to congressional battle in 1993 for NAFTA partnership passage (234 to 200 votes in the House, and 61 to 38 in the Senate), president Obama is expected to face challenges while making it one of his final goals in the office. Similar difficulties are expected in Canada while the process should be straightforward in Japan or Singapore.

TPP is written to ease adoption by additional Asian nations (South Korea is already pressing for swift acceptance), and to provide a potential template to other initiatives underway, like the Transatlantic Trade and Investment Partnership (source NY Times).

Tune to our special webinar with International Trade Administration on December 17 to find out more about the TPP and how it is targeting small businesses.